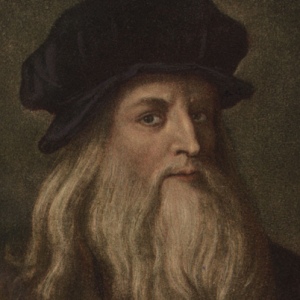 * Leonardo di ser Piero da Vinci was an Italian Renaissance polymath: painter, sculptor, architect, musician, scientist, mathematician, engineer, inventor, anatomist, geologist, cartographer, botanist, and writer. His genius, perhaps more than that of any other figure, epitomized the Renaissance humanist ideal. Leonardo has often been described as the archetype of the Renaissance Man, a man of “unquenchable curiosity” and “feverishly inventive imagination
Leonardo is revered for his technological ingenuity. He conceptualised a helicopter, a tank, concentrated solar power, a calculator, and the double hull, and he outlined a rudimentary theory of plate tectonics.

* From Wikipedia, the free encyclopedia